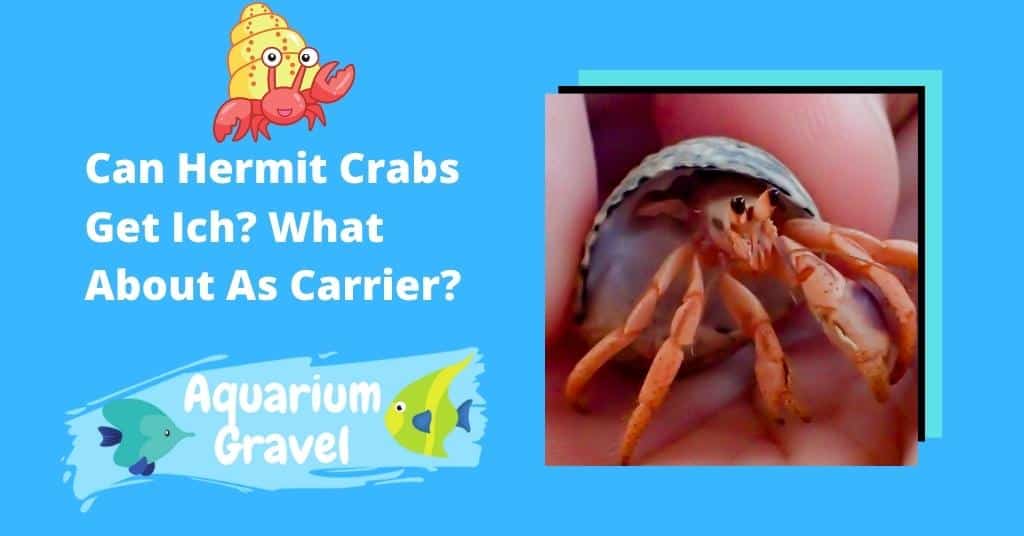 Can crabs get ich? Is that something you need to be concerned about when adding them to your new aquarium? This article explains the complicated relationship between ich and the hermit crab (or any other crab for that matter).

Technically speaking, Hermit crabs can’t get ich. Ich has no interest in infecting crabs because they don’t have the biological component that ich needs to reproduce.

Ich needs fish to reproduce and thus it usually only affects fish directly. However, That doesn’t mean a hermit crab can’t be a carrier to ich just because it can’t/wont be infected by the parasite.

On the contrary, Anything can “carry” ich parasites. Ich parasites have evolved to be able to survive for long periods of time outside of a host and to hitchhike on just about any available surface while it looks for a suitable host.

This includes hermit crabs and any other kind of crab. It also includes plants, rocks, gravel, in the water itself, snails, and just about anything else you can think of.

That means, while introducing your uninfected hermit crab to a new aquarium, he may still possess the itch parasite attached to his shell.

This just highlights the importance of quarantining things before adding them to an established tank.

We spend a lot of money cultivating and setting up our tanks, We put a lot of time and effort into them.

It’s important we don’t mess that up by being too eager to place new fish or other creatures and corals into the tank prematurely before we’ve had a chance to check them out.

So with all that said, if you only have a tank with hermit crabs that haven’t been checked for ich, It’s best to wait 9 weeks or so before adding any fish that could be infected by ich.

Those fish should also be quarantined and treated if necessary during that time so you don’t end up introducing the parasites into the tank regardless.

Can Saltwater Hermit Crabs Get Ich?

Salt has no effect on marine ich and it can still hitch a ride on any surface in your saltwater tank. That’s why it’s important to quarantine any new additions for at least two weeks before adding them to your main tank, medicated as needed.

A properly given freshwater bath has been shown to give a great deal of relief to fish who are suffering from marine ich.

The reverse is also true when adding aquarium salt to freshwater ich, however, it’s not as simple as freshwater fish are much more sensitive to the levels of salt needed.

Therapeutic amounts of salt or salt baths can be used, but a great deal of care and research should be done before attempting this on your own.

Are Mites and Ich The Same Thing?

Ich and mites are not the same things. Ich is a parasite that affects fish while mites are parasites that affect both fish and hermit crabs.

Mites can also be called “fish lice”. They are small (usually less than 1/16 inch long), red or amber, or off-white-colored, and have 8 legs.

Mites attach themselves to the fish and feed on their blood. They can also spread other diseases between fish.

Mites are not as common as ich, but they can be a serious threat to the health of your fish and hermit crabs.

If you think you may have mites in your tank, it’s best to take steps to get rid of them as soon as possible. This can be done by making sure your tank is fully cycled and clean, quarantining the new fish or crabs you add to your aquarium, or adding medicated food to help cure them.

You can also check this article from wikiHow on how to deal with mites specifically on hermit crabs.

This article goes through all the steps on how to get rid of mites as well as how to prevent them in the future.

So, can hermit crabs get ich? Yes, they can carry the ich parasites on their shells even if they themselves cannot become infected. If you are worried about your hermit crabs having ich, it is best to wait 9 weeks or so before adding any fish that could be infected by ich.

Any new fish you add should also be quarantined and treated if necessary during that time. Saltwater hermit crabs can carry ich too even though they can’t become infected by it, although salt has no effect on marine ich. It’s best to quarantine anything new you add to your tank for at least 2 weeks before you add them to your main tank.