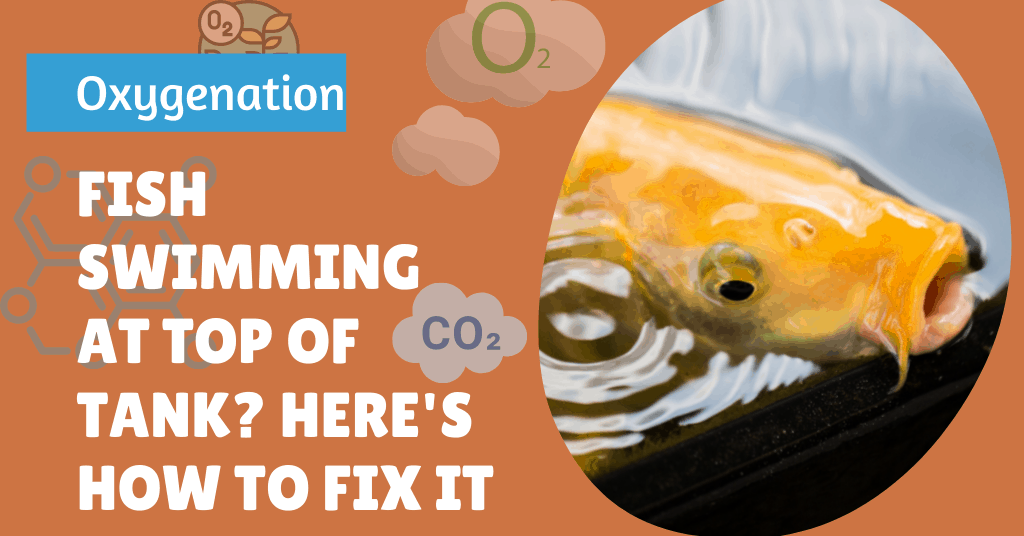 Why are my fish swimming at the top of the tank? Even after a water change? The most common reason for this is the lack of dissolved oxygen in the water. When oxygen is low fish will go to the top of the tank to breathe. It’s easy to fix with a simple cheap oxygenator pump and stone. Like this one.

One of the most important aspects of a fish tank is to maintain an appropriate amount of oxygen in the water.

The lack of dissolved oxygen in the water can often cause fish to swim at the top of the tank and gasp for air, which can lead to them suffocating and dying.

If you notice that your fish are frequently swimming at the top of their tank, it is worth checking on what could be causing this lack of oxygen in the water–doing a dissolved oxygen test is easy, but it costs a lot of money to get the testing equipment which makes it unreasonable for most aquarium hobbyists.

Luckily, I can tell you right now that almost every tank is under oxygenated, no test needed.

One of the most common causes for low dissolved oxygen levels is a lack of aeration in your tank–this can be remedied by purchasing and installing an inexpensive air pump that will push oxygen into the water, or you could even use a few pebbles with holes drilled through them as an alternative solution.

I do recommend getting a proper airstone and hose kit to go with the pump, however, as they are very affordable. Overall your spending about $30 on the pump and the hose/stones.

We recommend this one, But there are plenty to choose from!

Why do fish swim to the top of a tank after a water change?

If you have done a water change–either by topping off the tank with freshwater or adding new salt mix–and your fish are still swimming at the top after hours of observation, then this could also be due to low dissolved.

Your water source may be low on dissolved oxygen. But that doesn’t mean there aren’t other issues you should consider as well, oxygen is just the most common.

Most of the time, if you notice your fish keeps swimming to the top or at the surface of the tank, it is because they need more oxygen. Fish typically swim to the surface when there isn’t enough dissolved oxygen in the water. Low dissolved levels of oxygen will cause symptoms like gasping for air, labored breathing, pale coloration, and an increased heart rate.

Other symptoms of low oxygen in fish, lethargy, lack of interest in food, rapid movement of gills, and gasping at the surface.

These are all serious symptoms and you should take immediate action to remedy them.

Another reason fish will stay at the top of the tank, and possibly gasp for air, is a sudden spike in ammonia or nitrates. This can happen if you have an excess amount of fish waste, which will cause the water to become toxic and low on oxygen.

It’s especially apparent if all your fish swim to the top of the tank.

To check this, a simple ammonia and nitrite test is in order. It’s cheap and easy to do.

If nitrates show above 20ppm, or nitrites are above 3.0 ppm, or ammonia levels are above 0, or all 3! it might be time to do a water change.

This is also a good time to check your filters and do some maintenance on them.

If you have filter media or plastic bags, you should replace them occasionally. Filter media is like sand for your fish tank-it holds onto dirt and silt to keep the water clean, but sometimes it holds too much and clogs up.

Most notorious for this is mechanical filtration sponges and floss.

This causes a drop in the filtration power of your filter. Changing out the mechanical filter media every 3-6 months will make sure this doesn’t happen. Sooner depending on how overstocked your tank is.

Filter floss should be replaced more often than your other filter mediums, such as ceramic tubes, rings, or charcoal.

Keep in mind, if you’re changing your filter for any reason, You will need to put the new filter in for a few weeks before removing the older filter. This way the new filter gets seeded with your beneficial bacteria. Never replace an old filter medium with a new one without seeding it first.

Live plants in an aquarium help produce and originate the water. They are required to maintain the cycle of life in a tank. Plants release oxygen into the water and also clean it by taking up extra nitrates that build up from waste materials.

Adding live plants can go a long way in restoring your tank to a healthy balance.

It’s important when adding any new bioloads into the equation that you keep everything balanced. It’s very easy for the addition of a single fish to throw off the balance in your aquarium, shoot up ammonia levels, and lower dissolved oxygen levels.

So, What to do if your fish are staying at the top of their tank?

Test your water parameters. If ammonia is above 0, nitrites are above 3ppm and nitrates are above 100, then it’s time to do a water change. If all readings are normal then you should consider adding an oxygen stone into the tank to increase dissolved oxygen levels.

Sometimes we get concerned over nothing, and you could in fact just have fish that like to breathe at the surface of the water, which in this case would be normal.

Many species of fish breathe at the surface, such as betta fish, gouramis, and snails.

It’s important to research the type of fish you have before throwing water changes or changing filters in an attempt to bring their oxygen levels back up and water parameters down.

How do you oxygenate a fish tank?

One of the most common ways to oxygenate a fish tank is through the use of an air-stone. An air stone produces bubbles that provide your fish with the oxygen they need to survive in a closed system.

You can add air stones to your filter, or put them in different parts of the tank. It’s important to make sure it doesn’t create too much turbulence or disturbance that might cause too many bubbles and hurt your fish.

By placing them at the back of the tank, You may notice some fish and snails like to play with the bubbles. Snails for example love to go parasnailing (it’s funny because of the play on words…) over the bubbles.

Another way to oxygenate a tank is by adding live plants – they produce oxygen and are also very good at removing nitrates and other harmful waste.

Can you over oxygenate a fish tank?

You can’t over oxygenate a fish tank. If anything, Most will never have enough. In order to over oxygenate, You would need massive amounts of turbulence which would undoubtedly kill the fish before the oxygen would.

However, there is such a thing as too many oxygen stones, which will cause too much turbulence for your fish and may cause stress levels to spike.

In conclusion, why do my fish swim at the top of the tank? For a variety of reasons, but most likely the tank is under oxygenated, the water parameters are bad, or the temperature is too hot or cold.