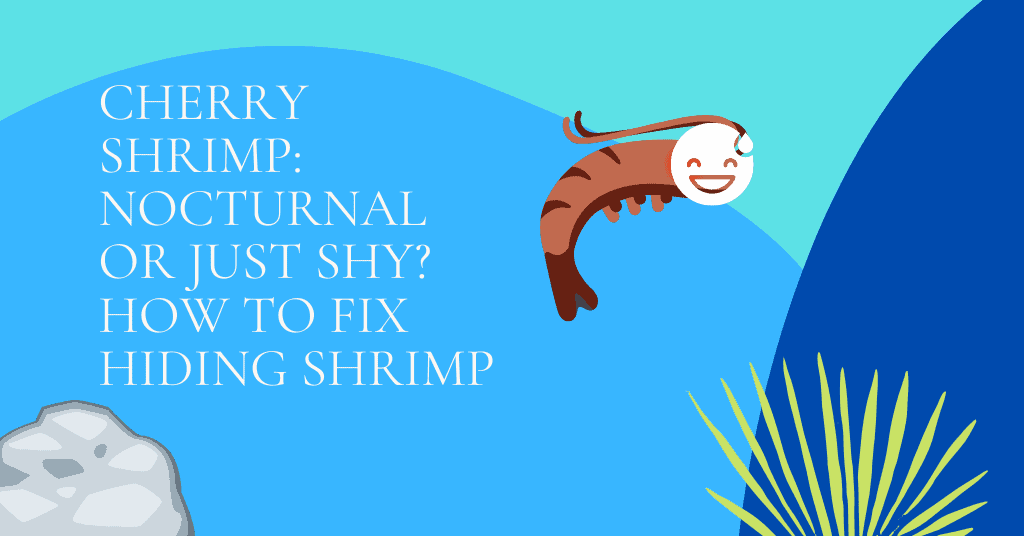 So you got some red cherry shrimp for that beautiful red-on-black hue. It would make a wonderful addition to your planted aquarium, but what’s this? They’re always hiding! What good is having such a beautiful shrimp when all they do is hide during the day! Are cherry shrimp nocturnal? Or is there something else happening to cause them to hide?

This might have been the first question you thought of when you noticed such low activity during the daytime. This is a reasonable conclusion as you might see them out and about at night more often than they are during the day.

However, Cherry shrimp are not nocturnal, they just seem that way because they feel safe at night, and tend to hide more during the day, especially when they’ve just been added to a tank.

Interestingly enough, Cherry shrimp can be trained to be nocturnal.

Cherry shrimp might not be nocturnal, But they aren’t diurnal either (Sleep at night). Cherry shrimp do sleep however, It’s just whenever they feel like it.

Shrimp sleep by going into hiding places and going inactive for brief periods of time. If the tank is generally safe and stress-free, they may do it out in the open environment while swimming or hiding position at the bottom of the tank.

However, these short shrimp active/inactive bursts are not enough to say sleep is the reason you don’t see them very often. There’s actually a couple of reasons why that happens.

Red Cherry shrimp are tiny dwarf shrimp which makes them fragile. Baby shrimp especially so, But even the adult shrimp are fairly small in nature. This makes them very timid and will find hiding spaces to flee and spend most of their time in.

There are 5 reasons they would rather do this than be out and about in the tank.

Reason 1: They’ve just been added to the tank and need some time.

Reason 2: They perceive a threat in the tank, Such as aggressive fish, ghost shrimp, and a lack of hiding spaces.

The Solution, How to Get Your Cherry Shrimp to Stop Hiding

Reason 1 is pretty straightforward. When you first add red cherry shrimp to your aquarium, they need time to adjust to their new environment.

They need to slowly move about this new environment until they feel comfortable and safe in the knowledge there are plenty of hiding places and no predators that want to eat them for dinner.

This can take several weeks, but assuming the aquarium is stocked with peaceful fish and in a nice planted tank, and no other shrimp that tend to be aggressive are around, They will start to come out more often.

Reason 2: After the initial few weeks of getting to know their new environment, But they still seem to be hiding, it could be because there is a perceived threat in the new tank.

An example of this would be if you have ghost shrimp. Can ghost shrimp live with cherry shrimp? Yes, technically, But they are much more aggressive than the peaceful red cherries and will probably cause your cherries to spend most of their time hiding.

Of course, many other species of fish are also considered a predator in the eyes of the small red cherry. Shrimp love nothing more than to hide in these circumstances.

To combat this, You can move the red cherry shrimp to their own shrimp-only tank. A well-planted tank. You could also consider moving them to a bigger tank.

A larger tank will make them feel safer as there will be more plants and hiding places for them to go as well as more space to keep them separated.

You can also aquascape safer shrimp-only areas in the tank where larger predators can not reach. You can do this using various rocks and plants and decorations.

This is the best option if you can’t afford to move them, or want to move them to their own space.

Reason 3: It’s spawning time! When female shrimp are carrying eggs underneath their body, they may spend more time hiding away for more brief periods.

This won’t change until she’s ready to “lay eggs”, or in the case of cherries, when the eggs underneath her body hatch. This is true of all cherry shrimp breed’.

The only solution here is to give her some time.

Reason 4: Molting. When shrimp begin molting, they are very vulnerable. The new shell underneath the old is very soft and doesn’t protect them. It needs time to harden up.

While a shrimp is waiting for that exoskeleton to become tough, they will hide away – even if no predators are present in the tank.

This is natural and only happens during molting, which can occur as often as every 3 weeks, And in younger shrimp, it can be as frequent as weekly as they grow so quickly.

The solution again is to just be patient. Shrimp won’t all molt at the same time and depending on how many red cherry shrimp you have, you may see several “naked” shrimp hiding away at any given time.

Reason 5: Illness. Red cherry shrimp can suffer from both bacterial infections, as well as fungal infections. When sick, Shrimp will spend a lot of time hiding.

They can also suffer from malnutrition or bad water quality. To combat these, test the water and do a water change.

While shrimps do eat algae, they require additional supplement foods you can buy at any pet store to feed them with. They won’t do well on algae alone.

They should also have enough calcium in their diet. Shrimp food usually has a bit of added calcium, but you can also add additional sources into the tank.

You can achieve this by placing cuddle bones into the tank. They will float for about a week before they finally sink. You may notice your shrimp hanging around the calcium bone like its food and appear to be eating it.

This just means they are getting the calcium they need to keep shell growth strong and healthy.

For bacteria and fungal infections see this article, as well as containing a giant list that can help with various other illnesses that may face your red cherry shrimp, such as:

Other Things That Scare Cherry Shrimp

Not having enough locations for your shrimp to dart behind and hide in will make them more paranoid and less likely to venture out of what little hiding areas they did find.

So while it might seem counterproductive, Adding more places to hide can encourage them to spend more time out if hiding rather than cowering unseen.

A strong water current will hamper the shrimp’s ability to to swim around the water column, And you may notice a lack of activity in your shrimp colony.

To fix this, consider turning down the filter outflow or anything else that’s causing a larger than normal current in the tanks.