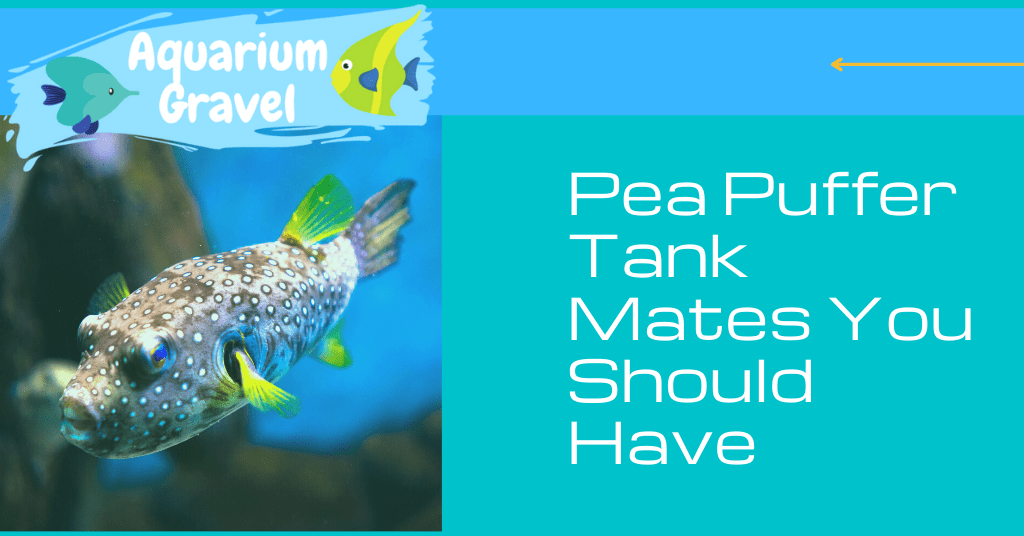 Most people struggle to find the proper pea puffer tankmates. Their territorial and aggressive nature makes it impossible to mix them with other similarly sized fish.

The best solution is to purchase one dwarf pea pufferfish and keep them alone. This will prevent any fighting, allowing you to go with a smaller tank.

That’s not particularly enjoyable, and it isn’t the best method to do things in general. The fact is that these fish are schooling fish, and do best in the company of others like themselves, are at the bare minimum, Some additional tankmates.

If you desire to keep them in a species-only tank Than it’s important to follow the 5-gallon rule of thumb. One pea puffer for every 5 gallons, and 3 gallons for every additional pea puffer. That brings up the maximum to 3 dwarf puffers per 10 gallons of water.

To keep these fish from becoming irritated and battling, do this. Despite their tiny stature, they may inflict significant damage.

If you wish to add them to a community tank, here are some things you should be aware of:

You should use the same size fish as your pufferfish. When you’re looking for a suitable aquarium, consider what type of fish you want to keep in there and whether they’ll be able to get away if they’re harassed or attacked. Pea puffers are fin nippers that will annoy slow fish. Obviously, big fish should also be avoided since they may harm or eat your dwarf pufferfish.

There are a few exceptions which I will list later on in this article.

On another note, If there are several pea puffers in a smaller tank, You should feed them live foods such as scuds and daphnia. This will prevent them from gathering on top of one another when feeding on a pile of food, which could cause aggression and territorialism.

Some safe community fish and pea puffer tank mates you can have are:

I mentioned that some smaller fish will be ok with pea puffers. Be very cautious of this list as each pea puffer has its own personality and aggression level. Everything on this list can go either way so if you decide to experiment, be prepared to remove the fish if anything goes wrong.

The tank should be very very well planted. Pea puffers are known for being diggers, so you have to plant low enough of potting soil that they aren’t able to uproot it.

A well-planted tank will give many hiding places and act as an escape route for all fish in the tank when things get hairy. Pea puffers like to dig and they tend to be somewhat territorial. So the more thick bushy plants you have in there, the better it will be for everybody.

And lastly… Pea puffers are schooling fish and dislike being alone. If you keep them alone, they will get very stressed out and can become ill or deformities may occur from lack of companionship.

Also of note, Pea puffers will eat shrimp. If you plan on keeping shrimp with your new pea puffer, consider having a second tank where the shrimp can be grown up without fear of being eaten.

You should also know that these fish are escape artists! Pea puffers have actually been found in house plumbing systems because they were able to fit through pipes as small as 1/2 inch wide! Keep this in mind if you have auto water change systems.

Pea puffer tank mates do exist. The best way to obtain some is to buy a pea puffer yourself and add your desired friend after acclimating them slowly with the pea puffer. This way, if anything goes wrong between them, you have more control over the situation because you have witnessed it first hand rather than having to hear about it from somebody else who may not know what truly happened. Remember that this is a trial and error process and even the most suitable tank mates can be eaten or killed by mistake.

So to sum this up, Pea puffers are not impossible to keep with other fish, but they need large tanks (I wouldn’t go smaller than 75 gallons), well planted, with lots of hiding spots. Pea puffers should also only be kept with larger fish or non-fish tank mates.

You should be wary about keeping them with invertebrates because these “puffers” will eat your shrimp if they are too small. Pea puffer tank mates do exist, but it’s a matter of finding out which ones work for you since different puffer personalities vary the aggressiveness level towards certain fish (or any living thing really).

While pea puffers are unlikely to eat guppies, they are known for their nipping. Since guppies have large fanned fins, they are perfect for nipping targets. Pea puffers may eat guppies if they get hungry enough, but it’s fairly unlikely.

Guppy fry on the other hand will be eaten without remorse.

Does that mean guppies are a bad idea to add to the tank? Not at all! Some pea puffers will happily tolerate a guppy and vice versa. However, Keep in mind each dwarf puffer has its own unique personality and temperament, and it will take some experimentation. Always have a backup tank read to go in an emergency.

Nerite snails are on the smaller side of snails, and will likely be picked at and slowly eaten. It’s not advised you put anything smaller than a nerite snail in the tank. Apple snails would be ideal but they will also eat all your important plants. My recommendation is to avoid snails all together.

Are pea puffers good for beginners?

I don’t recommend pea puffers for beginners. They’re an intermediate fish at best and will give noobs a run for their money.

Their easygoing appearance fools many new people into the hobby. The truth is, pea puffers take a lot of time and energy, and proper maintenance to keep. Just feeding them can become a challenge at times.

Yes, much easier than say, corydoras. Puffer fish are bred in the same manner as other puffers, and the breed of dwarf pufferfish is no exception. Keeping the water temperature at about 79°F is sufficient for breeding Dwarf Puffers. One male can be housed with one female in a 5-gallon breeding tank, but a separate breeding tank is not necessary in this case.

Don’t separate the adults from their eggs, as they do need to take care of the eggs themselves via fanning. They will not eat their own young but do remember you will need special food to feed fry dwarf puffers, such as infusoria, and then graduating up to baby brine shrimp.